ATEM Switcher 6.8 Update will be demonstrated on the Blackmagic Design NAB 2016 booth at #SL217.

This update adds incredible integration between ATEM switchers and HyperDeck Studio disk recorders, allowing customers to use HyperDecks as fully controllable sources into their switcher workflow for live production. Now any ATEM switcher can control up to 4 separate HyperDecks. Customers can also see a list of clips on each HyperDeck and trigger recording or playback automatically.

The HyperDeck Studio is connected to an ATEM switcher via Ethernet for control and communication, and via SDI for video playback or recording. Set up is easy and, once each HyperDeck has an IP address, it can be labeled so it can be seen as a source on the control panel. Once the HyperDeck is set to remote it can be controlled by the switcher. HyperDecks can be controlled from either the ATEM software or hardware panels.

The ATEM Switcher 6.8 Update allows customers to see a list of clips that match the ATEM switcher’s program format on each SSD in their connected HyperDecks. That means they can select clips in any order they want, cue the start frame and switch to the HyperDeck for it to immediately begin playing back in the program. Pre-roll can be set for the HyperDeck, just as it would be for a traditional tape deck, so video is rolling the moment the source is switched to the HyperDeck. The tape-style transport controls can be used to start and stop playback, jog, shuttle and more. The HyperDeck will automatically stop at the end of the clip and freeze on the last frame.

ATEM Switchers connected to HyperDecks now get instant replay functions too. Custom macros can be used to record a camera feed in realtime onto a HyperDeck. The macro can then re-play the video in realtime or at different speeds such as ¼ or ½ speed. This means customers can get super high quality slow motion playback when working with high frame rate cameras, ATEM Production Studio 4K and Broadcast Studio models, and HyperDeck Studio Pro or HyperDeck Studio 12G.

In addition to HyperDeck integration, ATEM Switcher 6.8 Update also adds support for 3G-SDI Level A, along with new language support for French, Spanish and German which have been added in addition to the already existing English, Japanese, Chinese, Russian and Korean languages.

“ATEM Switcher 6.8 Update is exciting because now customers can use their HyperDeck SSD recorders as sources during live program production,” said Grant Petty, CEO, Blackmagic Design. “This is something we have wanted to do for a long time, and now it’s finally here! This update means customers can add instant playback for spots or promos, credits, or even instant slow motion replays! It’s a massive feature update and, best of all, it’s free and works with all ATEM Switchers! With Blackmagic Design cameras, ATEM switchers and HyperDecks, customers now have a complete end to end solution for live program production in all SD, HD and Ultra HD formats up to 2160p60!” 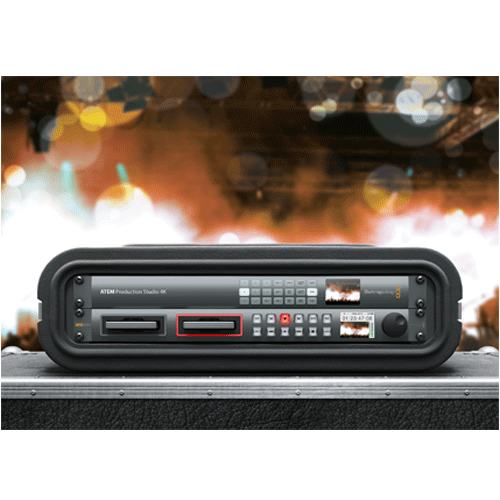