The new Blackmagic URSA Mini camera OS beta will be demonstrated on the Blackmagic Design NAB 2016 booth at #SL217.

The new URSA Mini camera OS is not just an upgrade, it’s a total rewrite from the ground up. The new OS has been specifically designed for the high performance processing architecture of URSA Mini and delivers a much more responsive experience, along with an entirely new user interface that makes using URSA Mini faster and more intuitive than ever before.

The first things customers will notice is the incredible new user interface and heads up display which dramatically reduces the number of menus and submenus needed to find specific settings and commands. Customers can now quickly change settings such as ISO, white balance, shutter angle, iris, frame rate, frame guides and more without ever having to navigate through any menus.

In addition, there are now custom white balance and white balance presets, along with tint control settings. Customers also get more accurate shutter angle selection, including a large easy to use on screen keyboard for easy entry of settings. When entering the shutter angle, the new URSA Mini camera OS will even offer smart flicker free shutter angle suggestions to assist the camera operator.

Entering metadata on cameras has always been tedious. The new URSA Mini camera OS solves the problem of tedious metadata entry by giving customers an entirely new metadata entry page with predictive entry suggestions and a preloaded dictionary of commonly used terms that can be applied as metadata tags with a simple tap. For example, if you stop and start the camera, the take will automatically increment. If you increase the scene number, shot and take, it will automatically reset to 1.

The new URSA Mini camera OS adds 1.33x and 2x anamorphic de-squeeze previews, along with the ability to double tap so customers can pan and zoom around the preview on the built in display. Customers can now import and store external 3D LUTs and apply the LUT to the LCD, front and main SDI outputs independently. They can also load and save their own presets for different shooting setups or different operators.

In addition, customers can now assign shortcuts to camera function keys, toggle between peaking and color focus assist, see new percentage based safe area guides and have the ability to toggle SDI overlays with information specifically geared toward either the cinematographer or the director viewing at video village.

“Customers love their URSA Mini cameras and are shooting some incredible footage with them,” said Grant Petty, CEO, Blackmagic Design. “The new Blackmagic URSA Mini camera OS is so exciting because it gives us a platform to build on for the future. There is a lot of extra power in the URSA Mini design that we have only just started to unlock, and until now this power has been hidden. The new URSA Mini operating system is going to let us build more of the features customers need even faster than before. Once you use it, it’s like getting a whole new camera for free!” 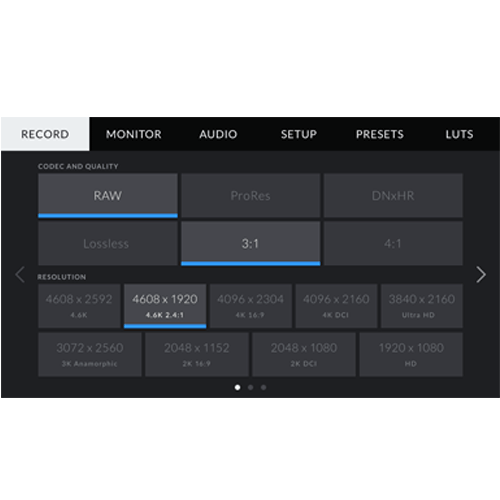