Featuring the latest 40Gb/s Thunderbolt 3 technology, UltraStudio 4K Extreme 3 has a wide range of digital and analog connections and is designed to work with virtually all formats ranging from SD and HD all the way up to Ultra HD and digital cinema. Thunderbolt 3 performance allows customers to work with the highest quality 12-bit RGB and highest frame rate video, including stereoscopic 3D and DCI 4K, making it perfect for high end feature film, television and commercial work. UltraStudio 4K Extreme features a hardware codec that can encode in real time into the new H.265 format.

UltraStudio 4K Extreme 3 will be available in May for US$2,995 and will be demonstrated on the Blackmagic Design NAB 2016 booth at #SL217.

UltraStudio 4K Extreme 3 uses the new Thunderbolt 3 connection for transferring data to the host computer at up to 40Gb/s. That means customers using the latest desktop workstations and laptop computers can now work with extremely high end video from anywhere using a single, thin Thunderbolt 3 cable.

UltraStudio 4K Extreme 3 also includes a built in multi format hardware codec that allows capturing video directly to H.265 files, which is the new compression standard for distributing Ultra HD content online. The demand for content encoded in the H.265 format will become higher as customers demand high quality Ultra HD content for the latest televisions they are purchasing today. This means UltraStudio 4K Extreme 3 is the perfect solution for real time encoding of Ultra HD for online distribution of content.

Customers will be able to capture and playback Ultra HD in YUV at 60 frames per second as well as Ultra HD and 4K RGB video at 60 frames per second via the advanced 12G-SDI video connections. The Thunderbolt loop thru allows connection of up to 6 devices, so customers can connect fast disk arrays for massive amounts of video storage with a single Thunderbolt connection to their computer.

UltraStudio 4K Extreme 3 handles virtually every television format, making it the ideal solution for all post production and broadcast users working on high end design, editing, paint, color correction and visual effects projects. UltraStudio 4K Extreme 3 is also perfect for 3D workflows because it features both interleaved/side by side and dual stream capture and playback. Interleaved 3D allows the left and right eye to be interleaved as fields into a single video connection and file, so customers can use edit and finishing software such as DaVinci Resolve.

“The addition of Thunderbolt 3 with its amazing 40Gb/s speed makes it possible for customers to edit and color correct with higher end, higher quality video formats than ever before,” said Grant Petty, CEO, Blackmagic Design. “This is the most powerful and versatile capture and playback device we’ve ever made because it connects to virtually all analog or SDI equipment, is incredibly fast, has a built-in hardware codec, and lets customers work at higher resolutions and frame rates with popular editing and color correction software like DaVinci Resolve 12.5!” 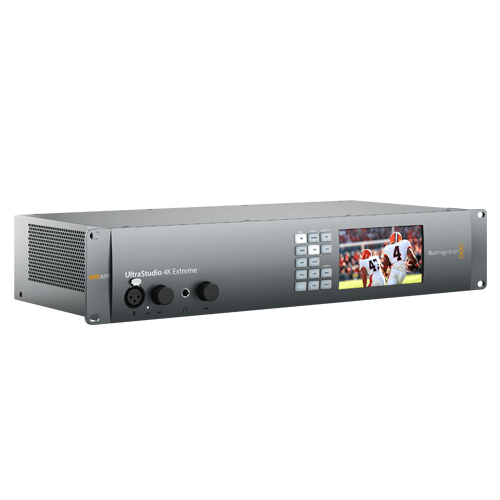