Blackmagic Micro Converters are available now and will be demonstrated on the Blackmagic Design NAB 2016 booth at #SL217.

Both models feature full size HDMI and professional 3G-SDI connections for working with all SD and HD formats up to 1080p60. Unlike other small video converters, Blackmagic Micro Converters feature the highest quality broadcast technology, miniaturized into a proper metal enclosure. Customers get the same broadcast quality 10-bit video processing found in full size converters. In addition, Blackmagic Micro Converters also have SDI re-clocking on the 3G-SDI input which regenerates the SDI video input, reduces SDI jitter and improves SDI eye pattern before the signal is processed. This allows longer cable lengths and makes them incredibly reliable for use in professional broadcast.

Blackmagic Micro Converters are powered via the same micro USB connection that’s used on smartphones so customers can use the included DC plug pack, any USB device, or even a smartphone charger to power the converters. The included external power supply supports 110 to 240V AC and comes with 4 different AC socket adapters so customers can plug them into outlets anywhere in the world. That means they can be run from the external power supply, or even over USB from things such as big screen televisions or laptop computers if there are no AC wall outlets available.

“The new Blackmagic Micro Converters are exciting because they give customers full 10-bit broadcast quality video processing in an incredibly small design they can take anywhere,” said Grant Petty, CEO, Blackmagic Design. “There’s never been a converter this good, this small and this affordable! Customers are going to use them in studios on broadcast news, at live events, hidden on set, with digital signs, in corporate or hotel AV setups and everywhere in between!”

Blackmagic Micro Converters are part of a large family of professional broadcast converters that include even more advanced models with a massively increased range of features. This range includes 3G, 6G and 12G-SDI models that are compatible with SD, HD and Ultra HD all the way up to high frame rate 2160p60. Blackmagic Mini Converters and Teranex Mini converters feature support for a wide range of connections such as balanced analog and AES/EBU audio, redundant inputs, analog video, optical fiber and more. 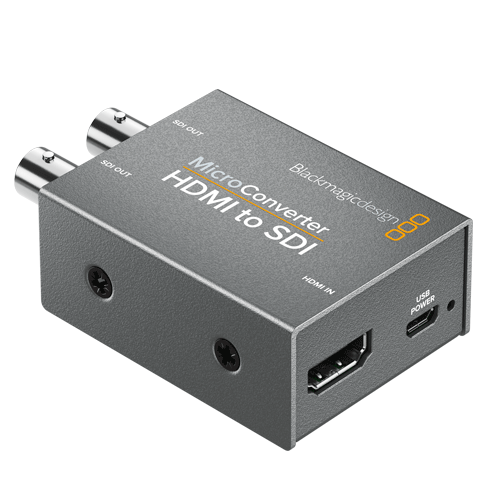