NAB 2016, Las Vegas, USA - April 18, 2016 - Blackmagic Design today announced Blackmagic MultiView 4, a new multi viewer that lets customers monitor 4 completely independent SDI video sources on a single display. Customers can monitor any combination of SD, HD and Ultra HD formats and frame rates all at the same time. Blackmagic MultiView 4 can output to regular HD monitors, however when customers plug in an Ultra HD display, they will get four times the resolution of a simple HD only multi viewer.

Blackmagic MultiView 4 is now available for US$495 and will be demonstrated on the Blackmagic Design NAB 2016 booth at #SL217.

Blackmagic MultiView 4 includes four completely independent multi rate 6G-SDI inputs with separate loop through outputs that are compatible with existing SD, HD and Ultra HD equipment up to 2160p30. All inputs feature automatic frame re-synchronization, so customers can mix and match any combination of video standards and frame rates, including referenced or non-referenced NTSC, PAL, 720p, 1080i, 1080p, and Ultra HD up to 2160p30, all on the same display all at the same time.

Customers can output to either regular 1080 HD or high resolution 2160p Ultra HD screens. Because Ultra HD runs at 3840 x 2160, which is four times the resolution of regular 1080 HD, the images are extremely sharp. This means when customers use it with an Ultra HD monitor, they get 4 full resolution 1080 HD views all at the same time on the same monitor, with each view being full resolution HD with no scaling. When this feature is used with very large screen consumer televisions, extremely high quality master control monitoring systems can be built at very low cost.

Blackmagic MultiView 4 is the perfect solution for live production, on set, in control rooms, or any place where space is tight and customers don’t have room for extra monitors. Customers no longer have to connect multiple monitors, dozens of cables or run extra power. They simply plug in cameras, decks, switchers, routers and feeds into the SDI connections on Blackmagic MultiView 4 and can see everything with amazing clarity and detail on a single HD or Ultra HD display.

Designed to be plug and play, customers can simply connect sources and instantly see a standard 2x2 layout on an HD or Ultra HD television. Using the included Ethernet remote control software, customers can turn on audio meters, choose which audio to output, as well as create custom labels, and more. Blackmagic MultiView 4 is also compatible with the optional Teranex Mini Smart Panel for customers that need to add front panel controls. For the ultimate in broadcast reliability and redundancy, you can even power MultiView 4 via the AC connection as well as power over Ethernet.

Blackmagic MultiView 4 is designed using the same compact, elegant enclosure as Blackmagic Design’s Teranex Mini converters so they are small enough to be used in fly away cases, outside broadcast vehicles, housed in equipment racks or even sitting on a desktop. They are only one third of a single rack space wide, so customers can mount them on the optional Teranex Mini Rack Shelf side by side with additional MultiView 4 or Teranex Mini products.

“The new Blackmagic MultiView 4 is exciting because it’s like having 4 completely independent HD broadcast monitors on a single display,” said Grant Petty, CEO, Blackmagic Design. “Even facilities that aren’t working in Ultra HD yet can take advantage of the increased resolution and clarity when using an Ultra HD display to monitor regular HD sources. They get four times the resolution and four times the clarity of an older style HD only multi viewer! The extra resolution is really important on live productions where you’re monitoring camera feeds and need to check focus. Customers also get the ability to view mixed video formats with different frame rates at the same time on a single screen, and the quality is amazing!” 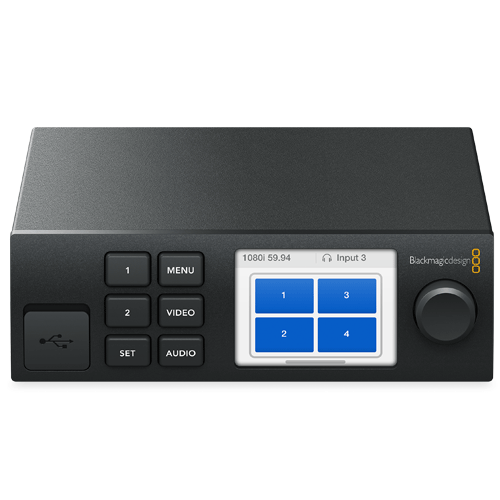